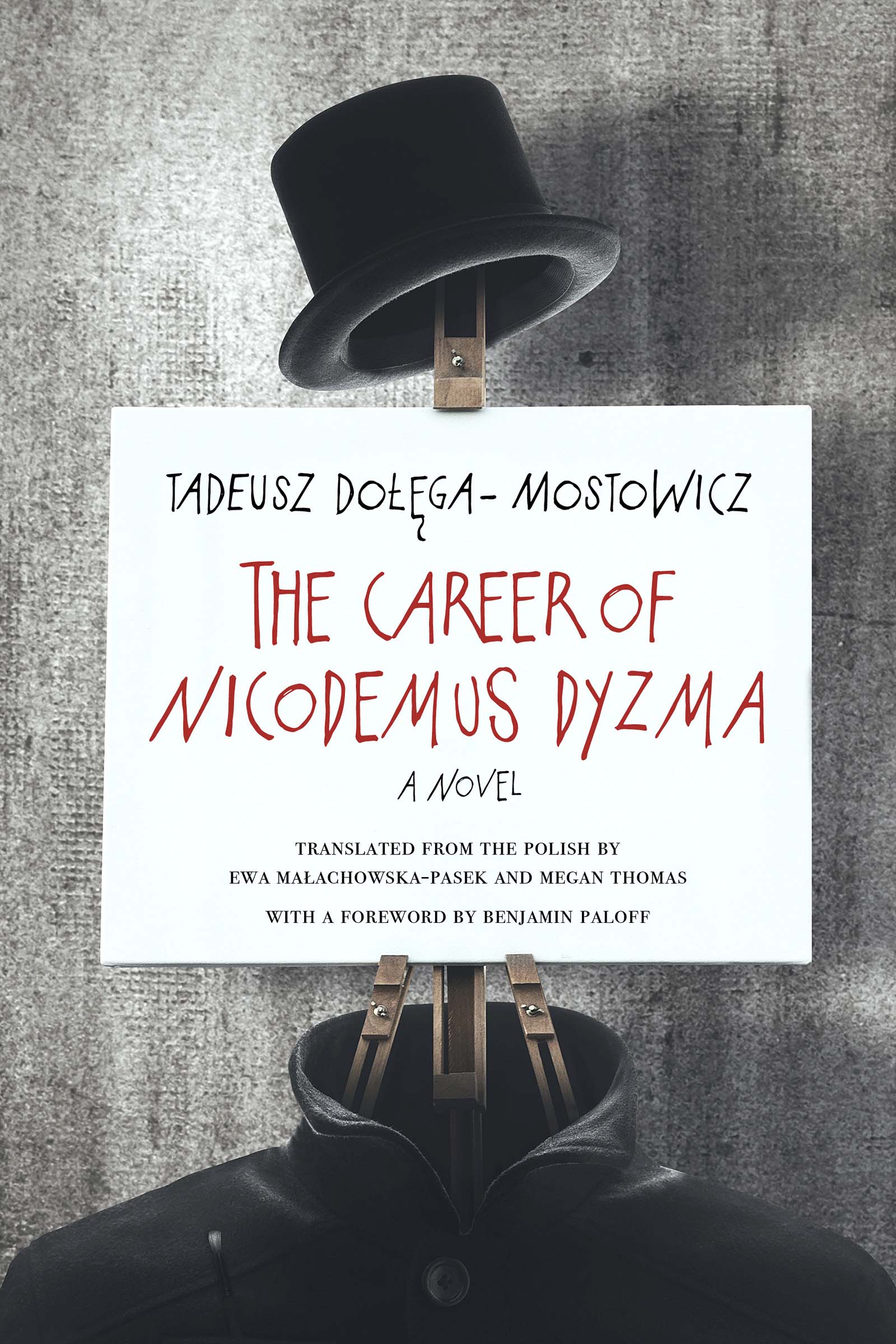 by Tadeusz Dołęga-Mostowicz, translated from the Polish by Ewa Malachowska-Pasek and Megan Thomas

The 1932 novel The Career of Nicodemus Dyzma is one of Poland’s most famous and enduring novels. The mordant political satire maintained its popularity before, during, and after the country’s Communist interlude and inspired a film adaptation in 1956, a TV miniseries in 1980, and a contemporary adaptation in 2002. It was also the inspiration for the award-winning 1979 American film Being There, which featured Peter Sellers and Shirley MacLaine. The novel follows the rise to political power of a churlish opportunist whose simplistic vulgarity the Polish elite mistake for canny introspection.

In the passage below, Dyzma is making his first steps up the social ladder. The landowner Kunicki has tapped Dyzma to manage his large and complex estate, a job for which Dyzma is completely unprepared.

They turned at an avenue of maples and rode for a good half hour past fields dense with ripe rye. The air was still, but out here the heat was more bearable.

Nicodemus burst out laughing. “You say that like it’s a bad thing!”

“And you don’t think it is?” Kunicki asked, surprised. “After all, it’s a disaster for agriculture.” Dyzma was tempted to tell him he didn’t understand, but he held his tongue. Better to be circumspect. “A disaster,” Kunicki repeated. “Prices are dropping like a stone. In two months, we’ll be selling it for chicken feed. It’s a high-yield disaster, dear sir.” Aha, Dyzma thought. You see, who would’ve thought! But best to say as little as possible, and for Christ’s sake, don’t ask questions.

“Well, sure, that’s understandable,” he said in a loud voice. “It’s just that I don’t agree that it’s as bad as you make it out to be.”

He fell silent, and it occurred to him that he needed to add something in order not to appear naive. Which is why he said, casually and somewhat randomly, “Grain’s going up.”

“Bah! But that’s only if the government starts stockpiling grain.”

“And who said they weren’t?”

“What are you telling me?!” Kunicki leapt up.

Dyzma was afraid he had made some ridiculous fundamental error but was immediately reassured when he saw the gleam in his companion’s eye.

“Hot damn! What are you saying? Has it already been decided?”

“My dear Nicodemus! What an absolutely brilliant idea! Brilliant! After all, it’s the government’s duty to protect agriculture; the country’s welfare is entirely dependent on agriculture, for God’s sake. Hell, in this country there’s nothing less than an obsession for tinkering around with the economy. But Poland is seventy percent farmers! Seventy percent. Not industry, not mining, not commerce, but agriculture and agricultural products, livestock and lumber—it’s the basis for everything! What’s good for agriculture is good for everyone—for manufacturers, for wholesalers, for workers! Mr. Dyzma, you really should, sir, you have a sacred duty to your fatherland, to use every bit of your influence to push this brilliant project forward! So the government is going to buy up all the surplus! My God! Koborowo and the house alone . . .”

As he began to mentally calculate the potential profit, Dyzma spoke up again.

“It’s just a matter of money. There isn’t any money.”

“Money, money? That’s nothing.” Kunicki was on fire. “A trifling detail. After all, the state can issue bonds. Grain bonds for, say, a hundred million zlotys. Pay the bonds and that’s that. Charging interest, obviously, at, let’s suppose, five percent, or even six. What do you think, sir? For six years, let’s say. And I’ll be damned if during that stretch there aren’t at least two boom years, right? So then we sell the entire grain supply abroad and make a bundle. What do you think? And tremendous benefits: primo, sustained high prices that’ll really save our hides, and secondo, increased circulation, because, of course, the bonds must be unregistered bearer bonds. And that way the state can give the domestic market a real shot in the arm, to the tune of a hundred million—now there’s a sum that will surely have a salutary effect on our catastrophe of a cash situation. Hot damn! You simply must talk to Minister Jaszuński about this . . .”

He broke off, and at the same time thought, This old guy’s got a hell of a good head on his shoulders. With a brain like that, he could even be a minister!

Kunicki pursued the matter unflaggingly. He rolled out various arguments, put forth reservations and doubts—which he immediately smashed with the power of his logical reasoning—on and on he lisped, his words tumbling out one after the other while he flourished his whip with emotion.

Meanwhile, the road had curved back into the woods, and they were making their way through tall pines.

In a vast clearing, cords of lumber were stacked along a narrow-gauge railway. A miniature steam engine had just begun to puff and hiss in the effort to move a dozen or so wagon cars loaded with great logs. Two rows of workers were helping it along, pushing the wagons from either side.

The workers doffed their caps with a reluctance that bordered on hostility. A weather-beaten figure in a gray jacket approached their carriage and was starting to say something when Kunicki cut him off.

The figure took off his cap and gave Dyzma an appraising look. Dyzma bowed slightly.

For a few minutes, while Kunicki grilled Starkiewicz on various particulars, Nicodemus looked curiously around at the masses of accumulated lumber, the barracks slapped together with old planks, the clearing with its whistling saws and moaning axes. When they moved on, Kunicki launched into an expert lecture on the many different grades of wood, the state of their utilization, and the tribulations of obtaining a permit to fell one’s own timber, a stand of trees in this very vicinity. He quoted articles of law, figures, prices, and from time to time he glanced at his companion’s face, which wore an expression of scrupulous attention.

In truth, Dyzma was flailing in a sea of panic. His consciousness was being buried alive under an increasingly berserk avalanche of concepts and ideas about which he had not the slightest understanding. He felt like a man beneath a toppled haystack. He’d lost all orientation and realized he was singularly ill equipped to deal with this state of affairs, and not by a long shot would he be able to control the situation enough to avoid disgrace and humiliation—to avoid, to put it plainly, ratting himself out.

They’d already toured the lumber station in the state-owned woods, the sawmill by the railroad terminal, and the furniture factory, and by the time they had finished their visit to the paper mill as well as some warehouse or another, the muddle in Dyzma’s head had grown to such a degree that he would’ve been glad to flee the scene right then and there. Looming before him was a towering mountain of incomprehensible business matters, bizarre and mysterious interconnections; he’d just met so many new people, these managers and directors, who spoke with such authority and with so many acronyms and abbreviations that Dyzma had managed to grasp nary a thing.

Excerpted from The Career of Nicodemus Dyzma: A Novel by Tadeusz Dołęga-Mostowicz, translated from the Polish by Ewa Malachowska-Pasek and Megan Thomas and with an introduction by Benjamin Paloff.

The Career of Nicodemus Dyzma introduces an unemployed clerk who crashes an elite soiree, where he makes a crass remark that sets him on a new course. Soon high society—from government ministers to drug-fueled aristocrats—wants a piece of him, interpreting his simple vulgarity as strength and freshness. His willingness to do anything to hold on to power—political flip-flopping, inventing xenophobic plots, even having enemies assaulted—only leads to greater success.

TADEUSZ DOŁĘGA-MOSTOWICZ (daw-WENG-ah maw-STOH-vich) was born in 1898 and began his writing career as a journalist. Kariera Nikodema Dyzma appeared serially in 1930–31 to great acclaim, establishing his reputation as a novelist. He published prolifically until his death in 1939.

EWA MALACHOWSKA-PASEK is Ladislav Matejka Collegiate Lecturer in Polish and Czech Studies at the University of Michigan.

MEGAN THOMAS is, with Ewa Malachowska-Pasek, the translator of Zofia Nalkowska’s Romance of Teresa Hennert.