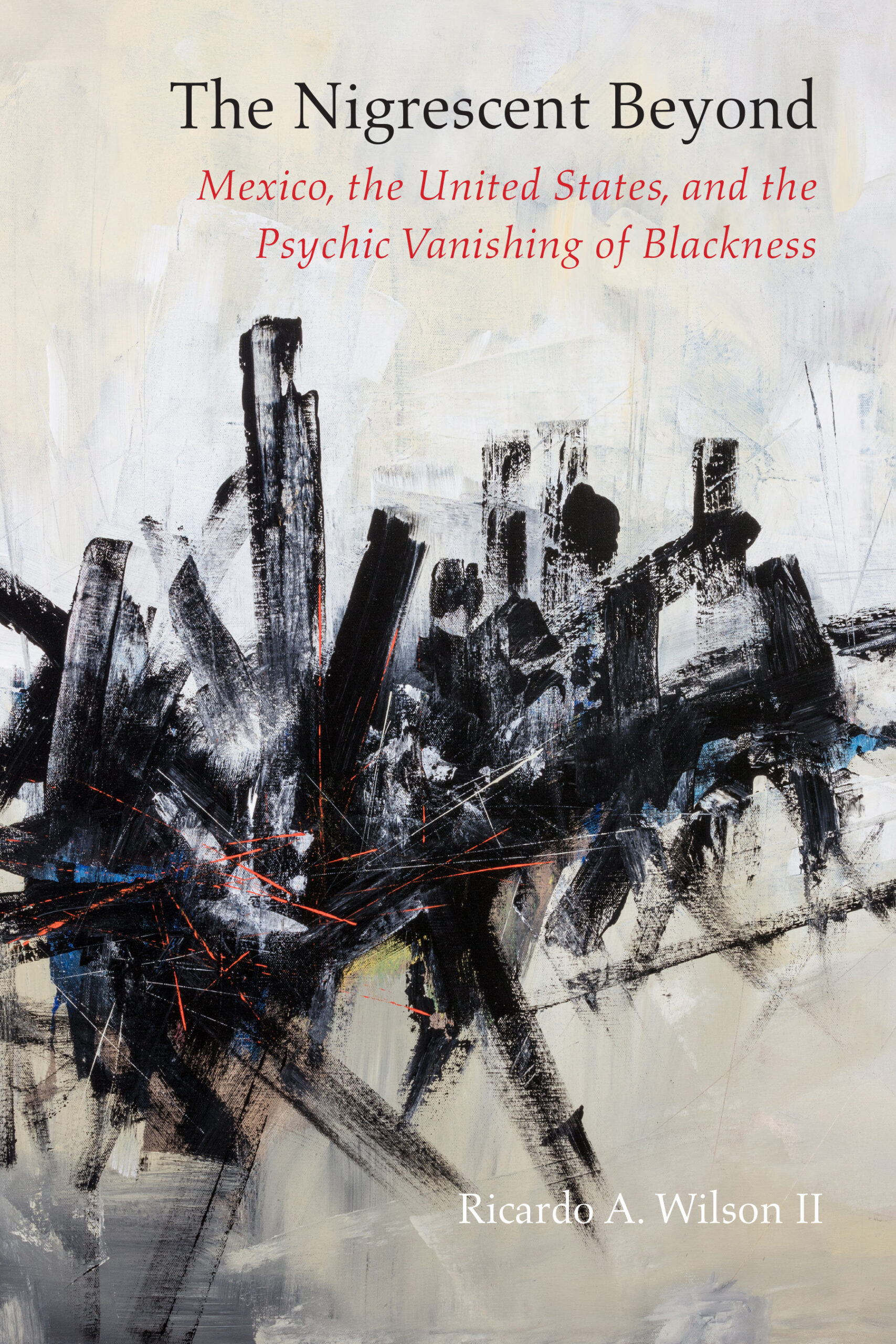 by Ricardo A. Wilson II

Despite New Spain’s significant participation in the early transatlantic slave trade, the collective imagination of the Mexican nation evolved in the nineteenth and twentieth centuries to understand itself as devoid of a black presence. In The Nigrescent Beyond, author Ricardo Wilson proposes a framework for understanding this psychic vanishing of blackness and thinks through how it can be used to both productively unsettle contemporary multicultural and postracial discourses within the United States and further the interrogations of being and blackness within the larger field of black studies.

The following is an excerpt from The Nigrescent Beyond: Mexico, the United States, and the Psychic Vanishing of Blackness (Northwestern University Press; July 2020) by Ricardo A. Wilson II.

Contemporary conversations revolving around ideas of blackness in the post-revolutionary Mexican context cannot escape the gravity of the future. Eduardo Urzaiz’s 1919 novel Eugenia: Esbozo novelesco de costumbres futuras, a work that both centers on and critiques the eugenics movement and the drive toward a perfect society, may be seen to represent a certain starting point in this regard. Published six years prior to José Vasconcelos’s world-building La raza cósmica, it brings to life Villautopia, the capital of the Subconfederation of Central America, in the year 2218. Born in Cuba and raised in Mérida, Mexico, Urzaiz was a physician with expertise in both obstetrics and psychiatry. He was an early supporter of birth control and coeducation and played a substantial leadership role at all levels of the then-developing educational system in the Yucatán.[1] This diversity of thought finds space in Eugenia, an elusive work framed as a love story where the value of modernization and an aesthetically grounded philosophy of procreation, the role of indigeneity in this future, and the concept of utopia itself are left productively unsettled. As such, the work forces a valuable contemplation. However, despite the somewhat nuanced and progressive nature of the futuristic sketch it provides, an idea of blackness rests on solid and antiquated ground. In Urzaiz’s imagination, Booker T. Kuzubé and Lincoln Mandínguez, two pejoratively named black doctors from the fictionalized Hottentot nation in Africa, come to Villautopia to learn of its eugenic practices and prevent “the evolutionary stagnation of their race.”[2] And here we hear the anachronistic echo of Vasconcelos’s straight-faced visioning of a fifth race synthesized from what he understood as White, Black, Native American, and Asian components that shaped Mexican racial thought (and Latin American thought more broadly). As many who study Latin America know, it is a synthesis that in many ways constrains the indigenous component and disappears the black.

Urzaiz’s black doctors are described, “like those of their race,” as having “formidable cannibal-like teeth” and a developed custom of “sleeping anywhere at any time.”[3] And while much of the legible world has been remade by Urzaiz (there exist the Confederation of the Americas and the Euro-Asian Confederation, for example), the system of “Africa” does not contain the possibility of such revision. So here, after a series of scenes that make up only a few pages of the novel, ends the narrative’s investment in any idea of blackness. It is either a blindness to or, if reading generously, a spot-on description of the cultural moment. In either case, there is no relief or subtlety to produce a vacillation or a rethinking in regard to the role of blackness in this (almost) aesthetically pure future. And while some of the scholarship surrounding Eugenia does address these few scenes, and this includes the work done by the editors and translators of the important 2016 English critical edition, this scholarship does not go much beyond noting that the representation of blackness by Urzaiz was clearly influenced by the eugenics movement. It is a scholarship apparently conditioned by a relative loss for words when interrogating what may lie beneath the surfacing of these representatives of Hottentot. And while my concern in the pages that follow is not with Eugenia as an object, the novel’s narrative does demand that a future blackness be not only nonexistent within the bounds of what one might argue to be a surrogate Mexico but manifested beyond this border as irrevocably backward in nature. This demand very much aligns with my interest in understanding Mexico as a space that collectively understands itself, and is largely understood by those looking in, as devoid of any substantial blackness. In other words, it is helpful to start with the fact that we have caught up with the vanishings of Urzaiz’s futures.

… In this book I construct a framework that facilitates an examination of this psychic vanishing in the Mexican context in order to think through how this might nurture and open up related discourses within the field of a United States–facing black studies … Mexico’s much longer trajectory concerning postraciality and the disappearance of black radical possibility gives clarity to the relation between ideas of blackness that remain legible and acceptable within the boundaries of a collective liberal imagination and those settling on the other side of this boundary that would otherwise compromise this imagination. Following this, I look to the center (not periphery) of several popular and canonical texts (literary, cinematic, archival, etc.) to find flashes of this nonpresence in order to sharpen an understanding of the question, How, in this contemporary moment, can a text be read to tell the story of something that has to have no story? [4] My project, however, remains distinct from those that have been drawn to the intersection of ideas of vanishing and race via theoretical frameworks grounded in haunting. Productive as these frameworks can be, I wish to move toward an unreadable fragmentation and away from the underlying assumptions of recoverability, however limited, that an idiom inflected by haunting implicitly presents. The work is thus a modeling of a practice of reading that honors and encourages the disruptive possibilities offered by a sustained, if anxious, awareness of what I understand as the nigrescent beyond, or that which lies, irretrievable, beyond the horizon of the process of vanishing itself. As such, nigrescence, the process of becoming dark, is mobilized to articulate the contours of a barrier at the limits of a collective liberal imagination, beyond which certain radical black matter(s) has become and is becoming unreadable even as one reads.

[4] The italics are a refashioning of Frank Wilderson’s question “How does a film tell the story of a being that has no story?” See Red, White, and Black: Cinema and the Structure of U.S. Antagonisms (Durham, N.C.: Duke University Press, 2010), 28.

RICARDO A. WILSON II is an assistant professor in the Department of English and affiliate faculty in the Program in Comparative Literature at Williams College.