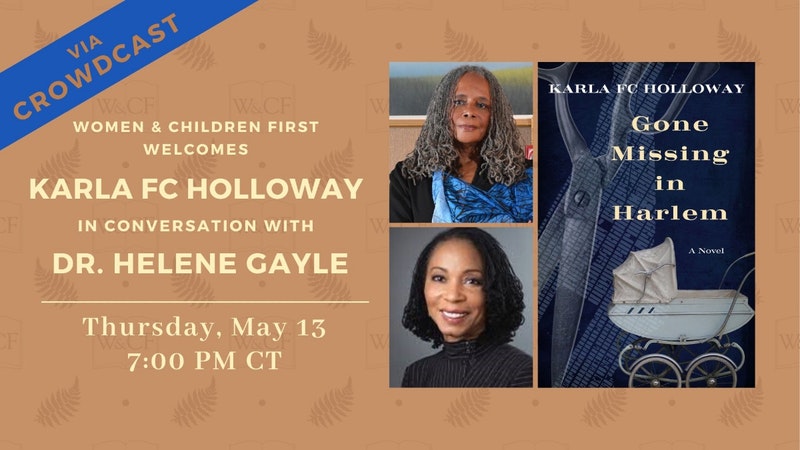 This event will be hosted by Women & Children First.

Join us for a virtual conversation on W&CF’s Crowdcast Channel in honor of Gone Missing in Harlem by Karla FC Holloway. For this event, Holloway will be in conversation with Dr. Helene Gayle, President and CEO of Chicago Community Trust.

In her anticipated second novel, Karla Holloway evokes the resilience of a family whose journey traces the river of America’s early twentieth century. The Mosby family, like other thousands, migrate from the loblolly-scented Carolinas north to the Harlem of their aspirations—with its promise of freedom and opportunities, sunlit boulevards, and elegant societies.

The family arrives as Harlem staggers under the flu pandemic that follows the First World War. DeLilah Mosby and her daughter, Selma, meet difficulties with backbone and resolve to make a home for themselves in the city, and Selma has a baby, Chloe. As the Great Depression creeps across the world at the close of the twenties, however, the farsighted see hard times coming.

The panic of the early thirties is embodied in the kidnapping and murder of the infant son of the nation’s dashing young aviator, Charles Lindbergh. A transfixed public follows the manhunt in the press and on the radio. Then Chloe goes missing—but her disappearance does not draw the same attention. Wry and perceptive Weldon Haynie Thomas, the city’s first “colored” policeman, takes the case.

The urgent investigation tests Thomas’s abilities to draw out the secrets Harlem harbors, untangling the color-coded connections and relationships that keep company with greed, ghosts, and grief. With nuanced characters, lush historical detail, and a lyrical voice, Gone Missing in Harlem affirms the restoring powers of home and family.

KARLA FC HOLLOWAY is the James. B. Duke Professor Emerita of English and Law at Duke University, where her research and teaching have included African American literary and cultural studies, bioethics, gender, and law. She is the author of A Death in Harlem: A Novel, published by TriQuarterly Books.

DR. HELENE D. GAYLE has been president and CEO of The Chicago Community Trust, one of the nation’s oldest and largest community foundations, since October 2017. Under her leadership, the Trust has adopted a new strategic focus on closing the racial and ethnic wealth gap in the Chicago region. For almost a decade, she was president and CEO of CARE, a leading international humanitarian organization. An expert on global development, humanitarian and health issues, Dr. Gayle spent 20 years with the Centers for Disease Control, working primarily on HIV/AIDS. She worked at the Bill & Melinda Gates Foundation, directing programs on HIV/AIDS and other global health issues. She also launched the McKinsey Social Initiative (now McKinsey.org), a nonprofit that builds partnerships for social impact. Named one of Forbes’ “100 Most Powerful Women” and one of NonProfit Times’ “Power and Influence Top 50,” she has authored numerous articles on global and domestic public health issues, poverty alleviation, gender equality and social justice.