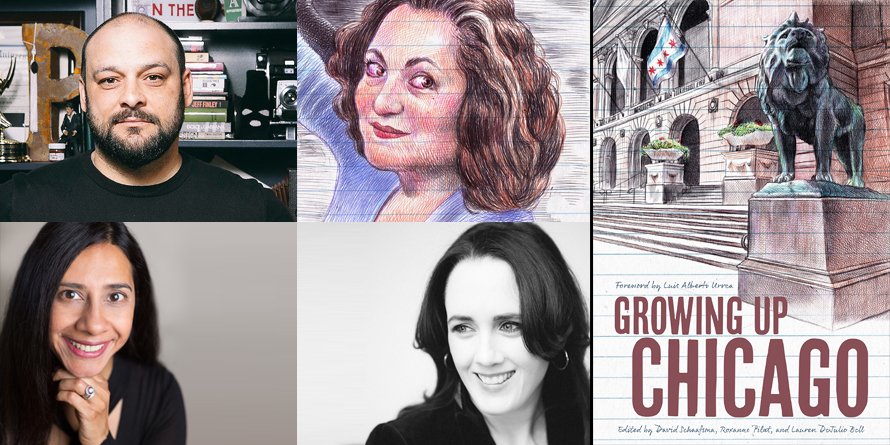 Celebrate City of Stories with authors who have contributed to Growing Up Chicago a collection of coming-of-age stories that reflects the diversity of this great city.

Christian Picciolini is an award-winning television producer, a public speaker, author, antiracism advocate, and a former extremist. Christian chronicles his involvement in and exit from the early American white-supremacist skinhead movement in his memoir, WHITE AMERICAN YOUTH, and is the featured subject in season 3 of WBEZ-Chicago’s ‘Motive’ podcast, which received the 2021 National Edward R. Murrow Award for best podcast in large market radio. For nearly two decades, he has helped hundreds of individuals disengage from hate. He has highlighted his disengagement process in a second book, BREAKING HATE, published in 2020 by Hachette Books, as well as in the MSNBC documentary series of the same name that aired in 2018-2019.

Emil Ferris is a graphic novelist whose first book ‘My Favorite Thing Is Monsters’ has been praised by critics since its publication in 2017. Her book – which presents itself as the lined notebook diary of a pre-teen self avowed werewolf who questions her sexual identity – is set in Chicago in the 1960’s. Emil is now a Guggenheim Fellow for Fine Art who has exhibited her work extensively in the US and Europe and was most recently honored to teach classes at the Louvre.

Samira Ahmed was born in Bombay, India, and raised in Batavia, IL in a house that smelled like onion, garlic, and potpourri. Ahmed is the bestselling author of Love, Hate & Other Filters; Internment; Mad, Bad & Dangerous to Know; Hollow Fires, and the Amira & Hamza series, as well as a Ms. Marvel comic book mini-series. Her poetry, essays, and short stories have appeared in numerous publications, including the New York Times, Who Will Speak for America, Color Outside the Lines, Vampires Never Get Old and a Universe of Wishes. In addition, she is the co-editor of the forthcoming anthology, Magic Has No Borders. Ahmed also taught high school English in Chicago and New York City, worked in education non-profits and served on political campaigns. Ahmed graduated from the University of Chicago with a joint BA/MAT. When she is not reading or writing, she can be found on her lifelong quest for the perfect pastry.

Jessie Ann Foley is the Printz honor-winning author of the novelsThe Carnival at Bray, Neighborhood Girls, Sorry for Your Loss, You Know I’m No Good and Breda’s Island. Her work has been named to best-of lists by Kirkus Reviews, Booklist, YALSA, Bank Street, Entertainment Weekly, and many other outlets, and has been featured on school and library recommended reading lists across the United States. Jessie lives with her husband and four children on the northwest side of Chicago, where she was born and raised.

The panel will be moderated by Roxanne Pilat. Roxanne Pilat was born and raised in Chicago, and is currently an adjunct associate professor at North Central College in Naperville. Prior to earning her MA at DePaul University and PhD at the University of Illinois Chicago, she was a full-time mom of three, and worked as a secondary teacher, reporter, and corporate communications consultant. Her work has been published in theChicago Tribune and the Chicago Sun-Times, and in the recent anthology Italian Women in Chicago. She is a founding editor of the journal Packingtown Review.

The book has been released in May 2022 from Northwestern University Press.

How to Attend
This event takes place in person. We encourage those who are not vaccinated, may be immunocompromised or have family members who are immunocompromised to wear a mask. Questions about visiting the library? Check out our Using the Library FAQ.

Need live captioning for this event or ASL interpretation for the event? Please call (312) 747-4072 or email access@chipublib.org. Requests must be made at least 14 business days before the event.