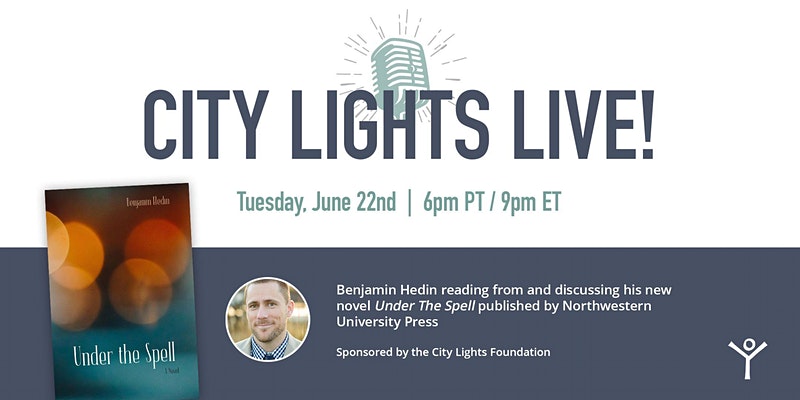 Under the Spell is the first novel by Benjamin Hedin, a dazzling new voice in American fiction. Newly widowed Sandra is searching her husband’s email for financial information when she discovers a correspondence between him and a woman named Ryan. Rather than simply sharing the news of the death, Sandra, who is shocked and hungry for details, instead impersonates her husband as she writes back to Ryan. This bold course of action will expose the secrets and solitude within her marriage, prompting her to reconsider everything she once held dear.

Unmoored and seeking connection, Sandra also meets Lee, a single mother with a drinking problem, and begins babysitting her daughter. But Sandra can’t stop herself from continuing the correspondence with Ryan, in the process uncovering more about her husband—and Ryan herself. A novel that forces us to question how much of a person, even those closest to us, remains obscure, Under the Spell reveals the astonishing, transformative power of grief. This compelling study in bereavement joins classics such as Don DeLillo’s The Body Artist and Joan Didion’s The Year of Magical Thinking.

BENJAMIN HEDIN is the author of In Search of the Movement: The Struggle for Civil Rights Then and Now and editor of the anthology Studio A: The Bob Dylan Reader. He has written for the New Yorker, Time, the Atlantic, the Oxford American, and the Chicago Tribune, among other publications. Also a Grammy-nominated producer of documentary films, he wrote the films Two Trains Runnin’ about the search for two forgotten blues singers and the multiple award-winning 2021 documentary MLK/FBI—called “eye-opening and jaw-dropping” by Rolling Stone. He lives in Atlanta.