Book Launch / “Fire Is Not a Country” by Cynthia Dewi Oka 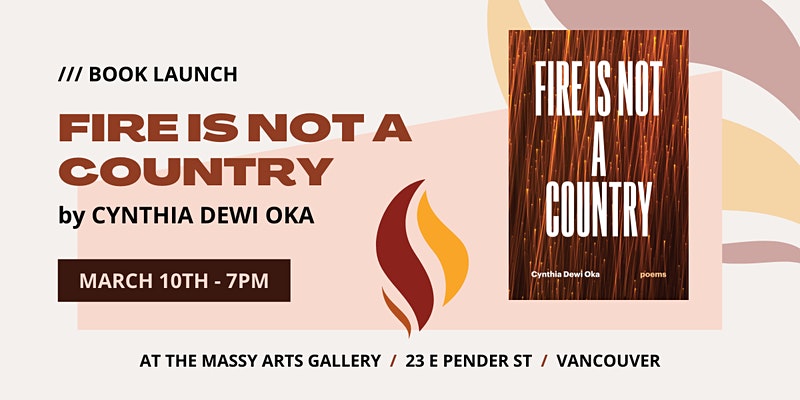 On March 10 at 7pm, join Canadian-Indonesian poet Cynthia Dewi Oka for the launch of her new book: “Fire Is Not a Country” (2021)

On Thursday, March 10 at 7pm, join Massy Books, Massy Arts, and Canadian-Indonesian poet Cynthia Dewi Oka for the launch of her new book: “Fire Is Not a Country” (2021, Northwestern University Press). In her third collection, Oka dives into the implications of being parents, children, workers, and unwanted human beings under the savage reign of global capitalism and resurgent nativism. With a voice bound and wrestled apart by multiple histories, Fire Is Not a Country claims the spaces between here and there, then and now, us and not us.

At the in-person event, Oka will be joined by host Hari Alluri, and guest poets Junie Désil, Mercedes Xue mei Eng, and Cecily Nicholson in an intimate gathering to read, listen to, and debate poetic literature.

The event will be hosted at the Massy Arts Gallery, at 23 East Pender Street in Chinatown, Vancouver.

The book launch is free + open to all of our community, and registration is mandatory.

With a voice bound and wrestled apart by multiple histories, Fire Is Not a Country claims the spaces between here and there, then and now, us and not us. As she builds a lyric portrait of her own family, Oka interrogates how migration, economic exploitation, patriarchal violence, and a legacy of political repression shape the beauties and limitations of familial love and obligation. Woven throughout are speculative experiments that intervene in the popular apocalyptic narratives of our time with the wit of an unassimilable other.

Oka’s speakers mourn, labor, argue, digress, avenge, and fail, but they do not retreat. Born of conflicts public and private, this collection is for anyone interested in what it means to engage the multitudes within ourselves.

CYNTHIA DEWI OKA was born in Bali, Indonesia. When she was 10 years old, her family migrated to Vancouver, Unceded Coast Salish Territories. Since 2012, she has been based in the Greater Philadelphia Area, Lenni Lenape Land.

She is the author of Fire Is Not a Country (2021) and Salvage (2017) published by Northwestern University Press, and Nomad of Salt and Hard Water, first published by Dinah Press in 2012, with a second edition of new and revised poems published by Thread Makes Blanket in 2016. She currently serves as a Poetry Editor at Kweli Journal.

A 2021-2022 Poet in Residence at the Amy Clampitt House in Lenox, MA, she has been awarded the Leeway Foundation’s Transformation Award, the Tupelo Quarterly Poetry Prize, and the Fifth Wednesday Journal Editor’s Prize in Poetry. She is an alum of the Voices of Our Nations (VONA) Workshop and the Vermont Studio Center, and earned her MFA as a Holden Minority Scholar at Warren Wilson College.

Junie Désil is a poet. Born of immigrant (Haitian) parents on the Traditional Territories of the Kanien’kehá:ka in the island known as Tiohtià:ke (Montréal), raised in Treaty 1 Territory (Winnipeg). Junie’s debut poetry collection Eat Salt|Gaze at the Ocean (TalonBooks, 2020) was a finalist for the Dorothy Livesay Poetry Prize.

Mercedes Xue mei Eng is a prairie-born poet living on the unceded territories of the xʷməθkʷəy̓əm (Musqueam), Sḵwx̱wú7mesh (Squamish), and səl̓ilwətaɁɬ (Tsleil-Waututh) Nations. Eng’s creative practice combines experiential knowledge, community organizing, independent study, and a hybrid poetics that deploys multiple forms of language from theory to memoir to official state documents to art and photography. She is the author of Mercenary English, a poem about sex work, violence, and resistance in the Downtown Eastside neighbourhood of Vancouver, and Prison Industrial Complex Explodes, winner of the Dorothy Livesay Poetry Prize. my yt mama, documents a childhood lived under white supremacy in Canadian prairies. Her writing has appeared in Hustling Verse: An Anthology of Sex Workers’ Poetry, Jacket 2, Asian American Literary Review, The Abolitionist, r/ally (No One Is Illegal), and Survaillance and M’aidez (Press Release).

Cecily Nicholson is an award-winning author of three books of poetry. She volunteers with community impacted by carcerality and food insecurity. Her readings, talks, and residencies have been hosted by spaces such as New York University’s Tisch School of the Arts, Woodland Pattern Book Center, Milwaukee, the Holloway Series in Poetry UC Berkeley, and the Surrey School District.

Hari Alluri (he/him/siya) is the author of The Flayed City (Kaya) and Carving Ashes (CiCAC / Thompson Rivers). An editor at Locked Horn Press and Writer-In-Residence for The Capilano Review, he has been awarded several workshop fellowships and project grants and his work is widely available through anthologies, journals, and online venues. Recently, he co-edited, with Seema Reza, We Were Not Alone:a Community Building Art Works Anthology. Hari migrated to Vancouver, on unceded territories of the Musqueam, Squamish, and Tsleil-Waututh Peoples, at age twelve, and currently resides in New Westminster, Qayqayt First Nation land.