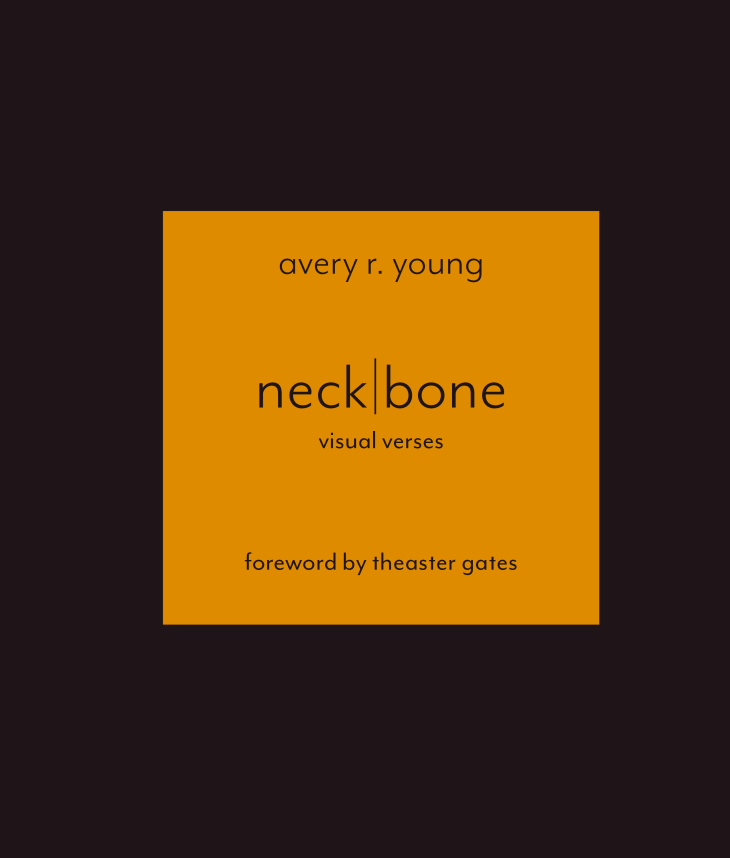 avery r. young’s neckbone: visual verses is a challenging, wildly creative book. Gorgeously printed as an art book—hardback cover, full color, larger trim size—it features photos of young’s artwork, mostly collages that combine text and visuals. In his artist’s statement, young says that the pieces in this book required performance and/or some level of physicality beyond poetry’s usual ink, paper, and language. The physicality of these verses is palpable.

Young’s work brilliantly moves beyond the limits of either language or visuals to evoke a deeper, more visceral audience response. He does it to illuminate the experience of black life “navigating through a grid of whiteness.” The subject matter ranges from scathing, thought-provoking attacks on racism, past and present, to deeply personal details of growing up on Chicago’s West Side. Even the materials he uses connect with black life. Along with paint, ink, tape, paper, cardboard and plastic, young employs hairdressing oil, Kool-Aid, an African American Barbie doll, chicken grease, and synthetic hair to create the works of art reproduced in neckbone.

The significance of the book’s title is made clear in the piece “titletrac(k)” where a rope has a discussion with a neck. The rope says, “yo body will do it to u. I jus(t) res(t) round trachea.” neckbone is a disturbing double entendre referring not only to the soul food staple but also to the part of the body that was encircled by the lynching rope. 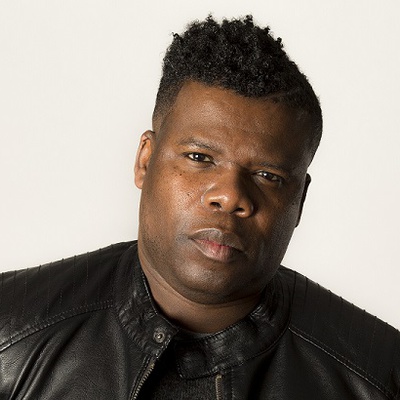 As defiant as this work is, a surprising amount of humor runs through it. In one piece, he creates a Drug Facts insert for a skin lightening product that, instead of drug facts, describes a crush the speaker had on a boy (Kwaku) in school. Under “Inactive Ingredients,” he lists various times he met Kwaku, including a moment alone in a locker room when Kwaku drops his towel while talking to him about James Baldwin. The “Directions” are listed as follows, “1. Wash face. 2. Rub on skinRite. 3. Let sit. DO NOT wipe off. 4. Help Kwaku with his Statistics homework.”

In another, he shows a restaurant receipt that, in place of the food items ordered, is a description of an argument at the speaker’s home. Reading down the receipt, we learn about a confrontation between someone who ate all the neckbones from a pot on the stove and the irate cook who stole twenty dollars from that person’s wallet to cover the cost of the food.

A phony test for a Black Studies course asks students to rank the reasons why “You will no longer be hosting the family reunion.” The choices hilariously unveil the problems a family has with a successful relative who seems to have forgotten her roots. One of the seven choices reads:

You mad Mama brushed Chloe’s hair down and pulled it into a ponytail. Yes, Chloe is your child, but you reminding everybody about what you pay for and who owes you what, is disrespectful, at best. 1. You forget them checks cut to get you through Yale. 2. You forget Daddy gave you the down payment on that condo. (All that money and you living on top of people, like Wilona and them did on Good Times). And 3. You forget you still owe me and Junior for the check we ran down to the lawyer office to get you out of Cook County. Solicitation of prostitution was the case they gave you. Lady Marmalade. 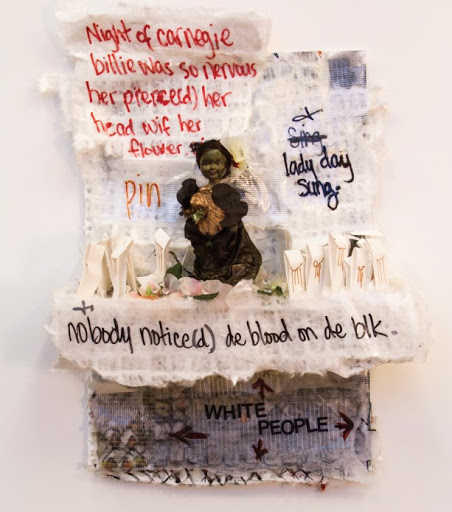 The dialect, personal experiences, family interactions, and incidents of racism have not been cushioned or interpreted for a non-black audience. Early in the book, someone in a writing workshop says to him, “first you have to create this code & then We will follow suit.” He responds with, “summa us don’t need a “t” to say wallah-mellon or DECODER: not necessarily fo(r) de NON-BLACK folk readin dis book.”

He follows this with a one-page “Grammar Glossary,” a scholarly, tongue-in-cheek aid for deciphering his idiosyncratic code (which this white reader found helpful). Young ends many of his pieces with an exclamatory, “blk!” The glossary defines it as, “blk = 1. Black as in a color. 2. Black as in the people. . . .”

This collection bristles with a work-in-progress energy. From page to page, there are cross-outs, handwriting in the margins, and editorial notes as though everything is continually in the process of being reworked and rethought.

One electrifying example of how that approach aids young’s expressiveness is a thirty-two-page sequence that begins with a handwritten note addressed to a child who was beaten up. Each subsequent page then reworks what came before with cross-outs and additions as though the author is trying to uncover his subject. After a few pages, the text centers on Billie Holiday. It starts with a dream of her appearing on the TV show, Soul Train (which first aired twelve years after her death).

As the pages progress, the story moves from Holiday not being able to properly lip-sync her songs on Soul Train, to the lips of a neighbor who attempted to rape her when she was eleven, to nuns who had her soak in a mustard bath for a back-room abortion, to her teen life in a brothel, to her ability to fight as she beat a white man who extinguished his cigarette on her arm. There’s even a collage that includes her revoked New York cabaret license (revoked due to a drug conviction).

All this culminates at a sold-out concert at Carnegie Hall, during which, while pinning a gardenia to her hair, she accidentally pierces the side of her head and bleeds for the remainder of the performance. Young’s piece ends with a paragraph that is mostly crossed out. The few, jarring words remain are, “a song spose to have a blood nobody can see on de blk.”

The crossed-out words are still readable. They give fragments of the singer’s hard-scrabble life—the rape, the abortion, the fights, the racism, the drugs. Through Young’s work-in-progress approach, we develop a deep appreciation of the complex life of Billie Holiday. All this leads to her triumphant Carnegie Hall concert in which she wows the audience through three encores as she bleeds, literally and figuratively, in a way that “nobody can see.”

Young uses his command of language, materials, and space to tell heartbreaking stories of young people who’ve been victims of violence. In the piece “June 4, 2012,” three narrow poems appear side by side. In the first poem, the speaker tells of seeing a drug dealer on the street three years after he taught that boy poetry in the seventh grade. The next poem repeats the first poem, but continues with an account of a two-year-old boy with his arms out who runs to the dealer as the dealer calls him “lil man.” The third poem repeats the second but adds that the dealer then kisses the little boy on his forehead as he tells the speaker that he remembers something from his poetry class, that “ery boy shud see him father read.”

By repeating the poem, then adding unexpected details, young challenges the reader to examine the stereotype of someone dealing drugs on the street. We see that person, still a boy himself, as a father who shows love to his son and a student who remembers advice from his teacher. We see him as complicated and individual.

This is followed on the next page by a collage of paper, ink, acrylic paint, Vaseline and thread. It depicts a memorial flyer for the same young man, showing him in his graduation regalia. The speaker tells of sitting in a back pew of the funeral when, in the middle of the preacher’s eulogy, the “lil man” who is now older, stands up, walks to the casket, and gives his father a kiss on the forehead. Young ends with, “ery boy shd see him father breve.” The statement of the utter waste of a human life could hardly be made more strongly.

The determination to expose and overturn expectations runs through the core of neckbone. This is especially on display as the speaker reflects on growing up black, gay and disabled. He recounts a number of sometimes humorous, often disturbing, incidents while coming to terms with his sexual orientation. They include bullying from those in his neighborhood, along with well-intentioned but clueless advice from family members.

In a masterful poem called “thirteen,” the speaker describes the effects of many surgeries and treatments he underwent for a crippling illness and how for five years he celebrated his birthdays in one hospital or another. The poem begins at the speaker’s thirteenth birthday and describes the events and interactions that occur each month until his next birthday. Finally, when he turns fourteen, he announces that there will be no more surgeries. His cousins tell him, “yo gonna be walkin wif yo crook(id) club feet till u cant walk no mo.” He declares that he’s going to find a discotech and dance. Because, he says, “u cant breve if u cant dance . . .” Despite the obstacles, he continually finds ways to embrace his identity and celebrate the person he is.

Whether fearlessly calling out acts of racism, humanizing the effects of senseless violence, or describing dysfunctional yet loving stories of family life, young’s shapeshifting work overflows with boundless creativity, the determination to say the truth, and, above all, a restless, infectious spirit. neckbone is a wild, go-anywhere ride that welcomes all readers, black and non-black, to climb in, buckle up, and hang on tight.

Mike Puican’s debut book of poetry, Central Air, will be released by Northwestern Press this August. He has had poems in Poetry, Michigan Quarterly Review, and New England Review among others, and he won the 2004 Tia Chucha Press Chapbook Contest for his chapbook, 30 Seconds. Mike was a member of the 1996 Chicago Slam Team, and is a long-time board member of the Guild Literary Complex in Chicago. Currently, he teaches poetry to incarcerated and formerly incarcerated individuals at the Federal Metropolitan Correctional Center and St. Leonard’s House.