The fallout from our current crises has not yet settled. As we have adapted to online iterations of our work, we have also experienced a profound loss of life, paired with an unprecedented economic collapse. How these crises might affect higher education writ large is perhaps already glimpsed by present conditions of austerity. For Digital Humanities (DH), the uneven and combined effects of the crises could fundamentally alter our disciplinary practice.

Digital Humanities are an assemblage of academic tools and methods that demand intellectual evolution. This is, first, a fact of DH’s disciplinary formation–interdisciplinary and technologically driven–but one that is still frequently debated. Second, the demand to evolve is a political principle realized in DH’s practice. Among its many iterations, traits like collaboration, generative thinking, and making are centered, modeling an intellectual evolution meant to resist individualism in the rush to produce knowledge within larger structures of individual gain. How these disciplinary practices are distinguished from long-established modes of humanistic inquiry define DH as much as they create inevitable tension.

Despite its digital character, institutional space—particularly the laboratory space—is most often the control mechanism that allows DH to realize its disciplinary potential. The lab, and all of its attendant costs, provides the material conditions for DH to affect humanistic inquiry because it gives us space to occupy. The DH lab might mimic more traditional iterations of the space, but it is often housed within a communal space like a library, maximizing the lab’s interdisciplinary potential. The lab is the chapter house of DH praxis, tantamount to access, technology, affiliation, and so many more aspects of what DH scholarship assumes in its practice. But what happens when the lab is closed, in some cases, for good? The question is not new to our condition of crisis, but is certainly more pressing. Perhaps the most obvious consideration here is precisely how institutional closure will produce conditions of unequal access. The speed at which DH labs reopen and provide their participants with resources will be a marker of privilege—prestige institutions stand to widen an already far-reaching gap between land-grant and teaching institutions of various sizes. For many of us, if not the majority, re-creating the resources and experience of the lab in our apartments or via Zoom is an impossibility. Even DH’s minimal iterations, which often offer the best examples of collaborative DH work, are likely to be inaccessible to most in our isolated and fragmented experiences of a global pandemic.

Perhaps the less obvious consideration of DH’s disciplinary evolution lies outside its preferred institutional space. Perhaps it’s not a question of space at all, but of method. Consider David M. Berry and Anders Fagerjord’s argument in their coauthored Digital Humanities: DH “needs to become more self-reflexive and, yes, theoretical in its approaches, to widen its intellectual breadth and depth” (11). Theory’s status in DH work remains marginal. Feminist and postcolonial interventions in DH are our most visible theoretical incursions, but Berry and Fagerjord’s argument aims to center incursions like these and expand them, “deepening [DH’s] critical reflexivity about the work and methods of its subject area” (18). It could be, to echo bell hooks’s “Theory as Liberatory Practice,” the formation of a disciplinary disposition where “our lived experience of theorizing is fundamentally linked to processes of self-recovery, of collective liberation”; a condition where “no gap exists between theory and practice” (2).

This is precisely where my book, Guerrilla Theory: Political Concepts, Critical Digital 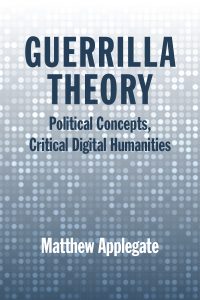 Humanities (Northwestern University Press, February 2020), models an approach to theory-driven DH work. The figure of the guerrilla, once commonly invoked in discussions over DH’s disciplinary formation, serves as a heuristic for theorizing the discipline’s continued evolution. My book is motivated by three future-oriented tasks: to (1) identify productive agonisms internal to DH praxis; (2) forefront disciplinary antagonisms to clarify DH’s disciplinary formation; and (3) position DH within a larger constellation of intellectual work that refuses to exclude the material realities of radical difference from their conceptual lineage (50). In this way, theory does not signify a return to individualism, nor a panacea to crisis, but rather an alternative practice for realizing collective goals.

In short, a theoretical turn in DH praxis is a dialogical act that demands participation and remakes our disciplinary conditions. Further, the self-reflexive work that theory offers us is a means of engaging with DH praxis absent heavy reliance on institutional funding, space, or expensive tools. Guerrilla Theory takes these propositions seriously, as it also signals a political turn with which to situate collective responses to radical institutional and disciplinary change.