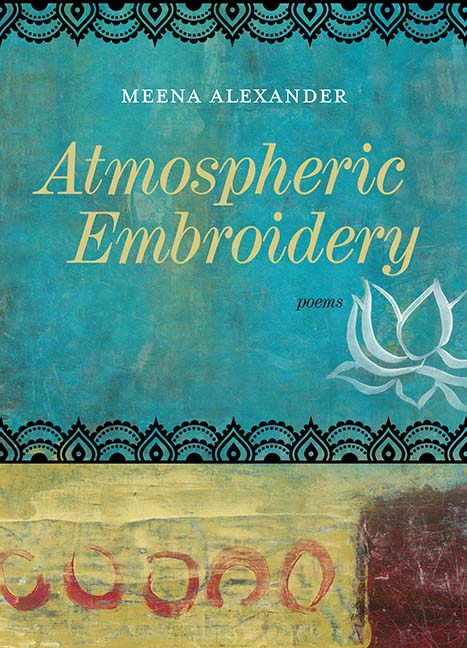 What goes into the making of a book?  Memory, dream, desire and always the pressure of the present whether overt or as undersong, lacking which composition could not come into being. And each time it feels like a new beginning, starting from scratch.

I wrote the first draft of the title poem in Provincetown, during a summer of violent storms, sunshine and sudden senseless deaths. The poem is underwritten by migrancy, worlds cut and coupled that one carries around in one’s body. And it is here that the art of Alighiero Boetti with its uncanny doublings comes in. Haunted by his embroidered art work ( ‘I mille fiumi piu lunghi del mondo’) that hung on the wall at MOMA, I kept seeing the names of rivers I had known, the Ganga of my birthplace,  the Nile in Khartoum, the Mississipi – Missouri in Minneapolis. The title is an homage to my father who taught me to love and respect the atmosphere, so threatened now. From my earliest childhood appa taught me the names of clouds, winds and waters.

There is a moment I have turned over and over in my head. I am standing on deck on the SS Jehangir, deep green waves of the Indian Ocean crashing all around. I have broken free of my mother and stand clutching the white railings of the ship. I am dressed in a pink frilly frock with embroidery on the yoke and skirt. The dress whirls about my legs, a froth of organza and lace, wind whipped. Amma had brought it along and tucked it in at the bottom of her leather suitcase, all ready for my fifth birthday. A week and a half earlier we had set sail from Bombay and were bound for Port Sudan where my father a meteorologist would meet us. This was just after Bandung, the historic Afro-Asian Congress of non-aligned nations that met in that Indonesian City. There was an accord between India and Sudan for technical assistance which was how my father ended up traveling to Khartoum. For almost the next decade a half, I travelled back and forth between continents. At eighteen I flew to England to study at a university there. Still that first sea voyage marked me forever, its hieroglyphs of loss and longing filled with meanings I am still trying to decipher.

On board the ship my mother tongue Malayalam and the Hindi I knew from earliest childhood shot out of one ear and the English around me changed utterly. There were white people, clusters of them speaking the language in a strange way. They kept away from us, almost as if the brown of our skin would spread and sully them. When we landed Arabic poured in and later I had friends who also spoke French. In this mingling of languages I understood dimly that there was so much that could not be spoken and that rich, even sorrowful awareness of the unsayable has been with me ever since. Out of this, poetry comes. This fine art of distilling language is also one that is predicated on silence.

I wanted to add that my handwriting can border on the illegible, much to the annoyance and perhaps fascination of others. I attribute this to my attempt as a teenager to perfect a script that would flow in between the borders of the Roman script, the Arabic script and the curvatures of Malayalam, the language of Kerala. It was as much calligraphy as anything else and how well its served me in my adult life is an open question.

Perhaps my poems are like that too, slipping between the lines of separate nations, continents of migration and settlement. Perhaps poems make up steadfast places for me. My body on the other hand is marked as that of a person of color, someone who is bound to a difficult and fractious existence, constantly drawn in, longing to be part of a whole, yet time and again cast out, till that tension has come to coexist with and seems inextricably bound to the idea of belonging.

I think back to mapmaking this book involved.  There are poems that like sign posts stand out for me. ‘Moksha’ evokes the gang rape in Delhi of the young woman Jyoti Singh Pande. Those who did not know her name and those who did called her ‘Nirbhaya’, which means ‘without fear . There is the cycle of Darfur poems based on drawings by children from the war zone. Growing up in Khartoum I had friends from Darfur. Where are they now, I wonder? The poem ‘Univocity’ opens with an epigram from Whitman, Word over all, beautiful as the sky! It starts in Provincetown, flows into my childhood in India and back again into the present of composition.  The last poem is ‘Crossroad’. I wrote it in the immediate aftermath of the presidential election. In its first version, it had the title ‘Winterlight’. I read it out standing on the steps of the New York Public Library as part of ‘Writers Resist’ gathering organized by PEN American Center, January 15, 2017.

The spine of this book of poetry is ‘Indian Ocean Blues’. At its simplest it was triggered by that childhood ocean crossing. I could not have composed the poem without the inspiration of Aimé Césaire’s Cahier d’un Retour Au Pays Natal. Time and again I heard the waves beat in his lines. One sea leads to another I wrote in response. Perhaps our migrant selves are the true marks of being and a steady place, what we constantly long for, is nothing but a palimpsest of time, on which we scrawl ourselves through these vulnerable moving bodies.

I started  the poem at home in the north of New York City, in my apartment not far from the edge of Fort Tryon Park with its exquisite heather garden and winding green passages. I completed the poem in Shimla, in the foothills of the Himalayas in what had been the summer palace of the British. Raj Shimla an old town of wood and stone filled with bustling villas and chock full of tour buses, cars and pedestrians, still bears a certain melancholy charm.

In childhood I learned the story of Sita, heroine of the Ramayana, cast out by her lordly husband Rama. The earth her mother tore open to give her refuge. In my imagination she slips into the earth of Manhattan island, through the crevices of Inwood marble and appears in metamorphic form, on the other side. Time whorls into space, disparate worlds merge in a shimmering whole which is what memory mingling with desire can sometimes grant us. In just this way a child crossing the Indian Ocean encounters Bras Coupe, the brave African American who escaped slavery, organized others to resist and had his arm chopped off in punishment

A big man, his wounds

In the course of  composition, over the space of a year or so, I kept listening to the music of Vijay Iyer, in particular his album ‘Solo’ which I had carried with me to India. Through the miracle of email I sent drafts of my poem to Quincy Troupe, all the way in Harlem. He bore patiently with me as I chopped and changed lines. When it was done the poem was published in the journal Black Renaissance/ Noire. The poem is now woven in separate sections through the whole book. While `Crossroad’ is the last full poem, a tiny final section of `Indian Ocean Blues’ which I have called `Lyric Ego’ makes for a fragile, provisional closure.