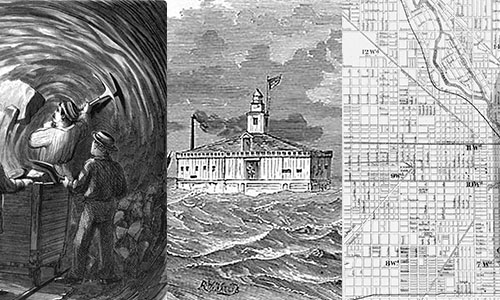 I own one of the oldest sailing schools in Chicago, and for twenty years I have taken people out to see the water cribs off the Chicago shoreline. The water cribs are the intakes for the city’s water supply, and of the seven still in existence only two are in service today. My favorite has always been the Four-Mile Crib, which came into operation in 1892. It stands about 3.5 miles offshore, but when it was originally built it was 4 miles offshore.

The remarkable thing for me about the Four-Mile Crib is its beauty. Standing alone, miles 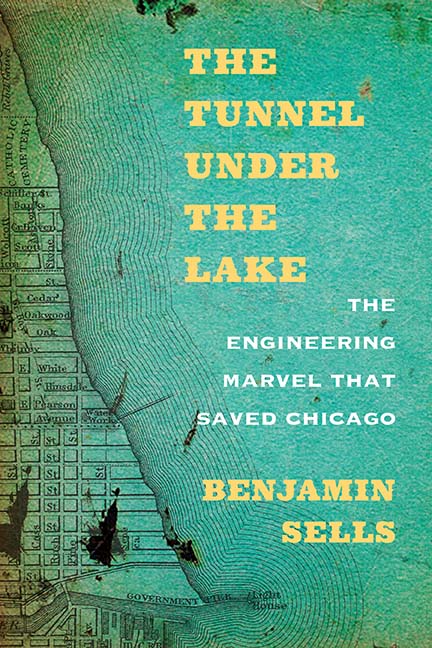 from shore and appreciating eyes, the structure itself is at once imposing and lovely. Intricate brick-work and delicate curves are a testament to a time when craftsmanship and beauty were worthy goals in themselves, quite apart from accolades or awards. So after years of looking, I decided to find out more about these remarkable structures. In my research I became immersed in a story beyond my expectation that would become The Tunnel under the Lake: The Engineering Marvel That Saved Chicago. The cribs represent an existential struggle that has dogged Chicago from its origins, the dilemma of waste and water—what to do with the former and how to get the latter.

Early Chicago was threatened in its infancy by a suffocating amount of human waste, garbage, and untold horrors dumped into its waterways by the burgeoning industries of the day. Chicago exploded onto the national scene, experiencing unprecedented population growth. And with that success came the looming specter of a city built too fast and unable to sustain itself.

In the beginning, Chicagoans got their water from wells and water carts. Later a rudimentary public supply was established that drew water from the nearshore waters of Lake Michigan. This was fraught with difficulty. Early narratives tell of turning on a tap only to have a minnow come wriggling into your glass. Unscrupulous bar owners were busted for watering down their wares when customers spied pickled minnows in the bottles. And things only got worse as the river and lake became, in the words of the Chicago Tribune, “the common receptacle for all the filth of the city.” Throughout the mid-1800’s Chicago endured repeated outbreaks of cholera because of its inability to supply its residents with clean drinking water despite being on the shore of one of the world’s largest supplies of fresh water.

Waste and water—what to do? To answer this question the city in 1855 turned to Ellis Sylvester Chesbrough, then city engineer in Boston. In Chesbrough the city found a man of singular vision and undaunted character. He first tackled the city’s waste issue by raising the city so that the first comprehensive sewerage system could be installed. His efforts to drain the city of its waste succeeded, but only at the expense of it waterways and nearshore waters. Chesbrough then faced the second horn of the dilemma—fresh water for a city in desperate need.

His answer was one of audacious simplicity, to dig a two-mile tunnel under the lake to a massive water intake crib offshore beyond the reach of the pollution. It would be the longest underwater tunnel of its kind, dug by hand and bricked up seventy feet below the surface and thirty-five feet below the seabed.

The naysayers were loud and many. The mere thought of having workers toiling beneath the waves was too much for those whose fear blinded them to Chesbrough’s carefully thought-out plans. But Chesbrough proved to be as talented in navigating the shoals of public opinion and Chicago politics as he was at being an innovative engineer. After years of cajoling and reassuring that his plan would work, it was approved and in March of 1864 ground was broken on what would come to be called the Great Chicago Lake Tunnel.

In the ensuing three-years the surveyors and diggers and haulers and masons pressed forward. They overcame challenges both scientific and human. A tunnel beneath the waves posed an unprecedented engineering challenge, as did the massive Two-Mile Crib at the tunnel’s eastern end. Nobody had ever conceived, much less built, a structure that was at once both a fortress and a ship, a structure the size of a courthouse that would be anchored to the seabed and have to endure the storms and crushing ice of Lake Michigan.

Like every great engineering project there were problems of a human kind too. Chesbrough had to deal with both the physical and psychological toil of the massive project. He would confront insanity and even murder among his staff and workers. But he never wavered, and in March 1867 the tunnel under the lake began providing the newly built Chicago waterworks with a supply of fresh water for a thirsty city.

The city never looked back and continued to grow exponentially, as did its need for fresh water. After enduring the catastrophic impact of the Chicago fire in 1871, the city built a second tunnel to the Two-Mile Crib in 1875. After finding that it needed to reach even farther offshore for unpolluted water, the city built the Four-Mile Crib and its tunnel that went into service in 1892.

When I began to research the Four-Mile Crib I thought I would learn a little about engineering and maybe a smattering of art and architecture. Where I ended up was with a story about an engineer and his remarkable ideas that saved Chicago from itself. More than the politicians and industrial magnates that tend to overshadow Chicago history, it was an engineer, and the tunnel hailed as “the wonder of America and of the world,” that made possible the Chicago we know today.